The Pig and The Lady - Kailua, HI

The Sophisticated Eater (SE) found itself at the Kailua Farmers Market and made a beeline for The Pig and The Lady. Not surprisingly, the line was already 15 eaters strong with what looked like another 15 on their way.

After doing some internet sleuthing, The SE was practically drooling over what seems to be their most popular item, the "Pho French Dip". No matter how far and wide one has traveled, it is safe to say that a french dip sandwich done right has no equal. Having eaten many a bowls of exquisite, as well as subpar bowls of pho, The SE knew this pho/french dip mash-up was either going to be a culinary masterpiece or a hot mess that "accidentally" found itself dropped in the trash.

Order placed, The SE sat expectantly at a long picnic table with a red and white checkerboard tablecloth. A plastic bin filled with chopsticks, hoisin, and sriracha sat at the ready in the middle of the table.

Finally, the anticipated guest arrived at the table. Inspections to the dish found that the bread was hard on the outside but soft and flaky in the middle - good sign. A gentle squeeze revealed the sandwich innards to be juicy and messy - yet another good sign. Last but not least: the pho. Flavorful, well-balanced, hot - yes!!

As might be expected, the full "pho dip" went well. Crunchy bread with juicy meat, hoisin, pickled veggies and cilantro met pho and it could not have gone better. Live music by a local band only added to the nirvana achieved by this meal. This sandwich is truly one-of-kind and may well be worth the $1k plane ticket alone to come out and try it. 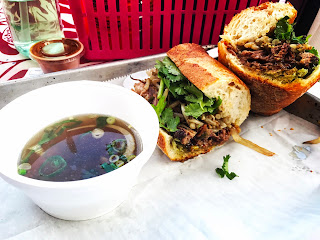 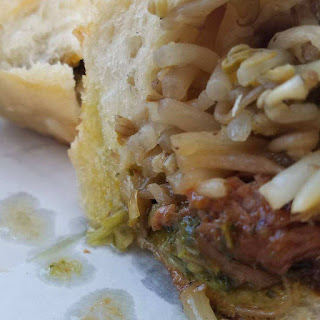 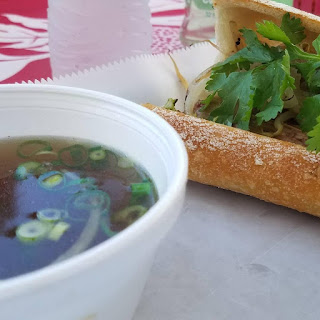 The Pig and The Lady can be found at the Kailua Town Farmers Market every Thursday from 5:00pm - 7:30pm or at their brick and mortar in Honolulu everyday. The SE highly recommends opting for their Kailua location though because, duh, vibes. Check out their menu here. 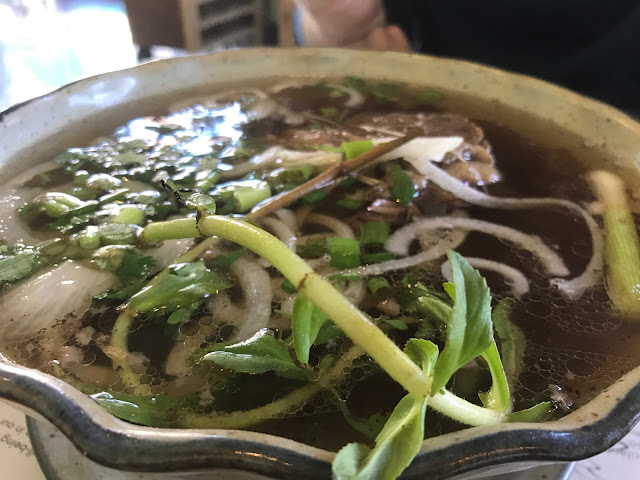