The Sophisticated Eater: In the Air

The Sophisticated Eater found itself stranded today 39k+ feet in the air inside of a large, confined metal tube, which begs the question: what does The SE chow down on when going out somewhere is simply not an option?

Basic criteria - it must be small, compact, and meet TSA guidelines. Obviously, anything viscous or leaky is immediately disqualified.

The SE prefers easy to pack snacks that will keep one satieted, but will leave enough room for a full meal later on. For this reason, most of The SE's go-to travel snacks are high-ish in protein that also meet SE snack standards. Here's what was found in The SE's carry-on today: 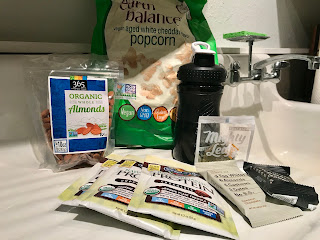