The Sophisticated Eater discovered this Korean food haven nestled in the middle of a nondescript block in Downtown Honolulu. Don't let its bland exterior fool you - this little establishment is going to serve up food that will knock your socks off.

Walking into the main dining salon, The SE noted the crisp, clean lines of the slate gray tables and industrial metal chairs lined up in military precision underneath them. Not a stray utensil was out of place, making it clear that this establishment cares deeply about eater experience from start to finish.

Spotting an open door in the back, The SE asked to be seated outside and was immediately transported to an outdoor oasis full of zen, twinkling fairy lights, willow trees, and waterfalls. What was this place?! In awe, The SE took a seat amongst the greenery.

Eyeing the menu, The SE was intrigued to see that Topped offered both white and brown rice options for their bibimbap bowls. Let it be known that brown rice has become increasingly trendy to serve in SE-standard eateries, but is rarely prepared well. Because The SE had to know the answer (Does Topped know what they're doing?), a brown rice chicken bibimbap was ordered with a hot stone bowl. What happened when said meal arrived at the table was truly a complete surprise.

The SE has had many a bowl of lackluster bibimbap, so it is not lightly that it is announced that Topped has THE BEST BIBIMBAP in the United States (though The SE is perfectly willing to come to your city to test this - comment below to challenge). The shoyu marinated chicken was tender and cooked to perfection, balanced out by the crisp crunchiness of the vegetables. The brown rice was perhaps the star of the dish though - well-seasoned and fluffy, not dry and flavorless brown rice that other restaurants usually serve up. As a plus, the moisture in the rice allowed for the formation of the desired underlayer of crispy rice, which as all SE's know is the whole point of ordering bibimbap in a hot stone bowl.

Savoring each bite, The SE was more than a little sad when the last morsel was scooped up and the bowl empty. Regretting not eating twice as slow, The SE pressed the call button on the table to ask for the check.

The SE exclaimed delightedly when a small ramekin of ice cold peach tea arrived at the table, along with the check. Sikhye, a sweet korean rice dessert drink usually served cold, is a personal favorite of The SE's. While Topped had opted for a more approachable peach tea, this was clearly a nod to a revered Korean dessert. 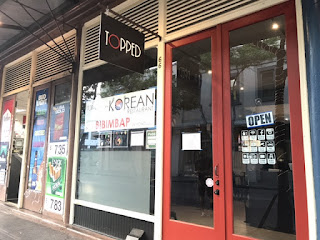 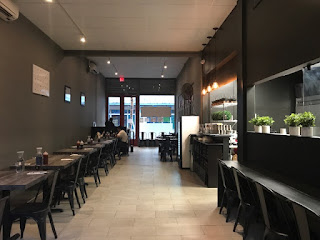 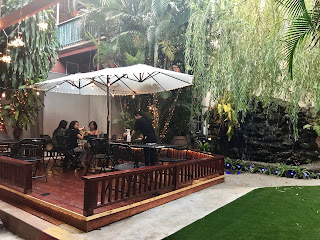 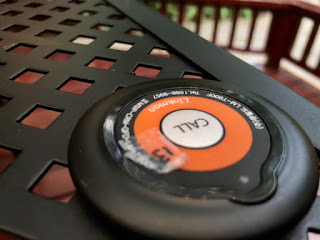 A call button for your waiter, seen in most restaurants in Korea. Don't be shy, use it! 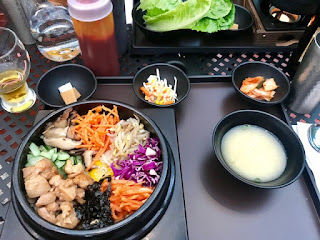 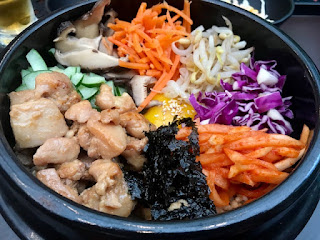 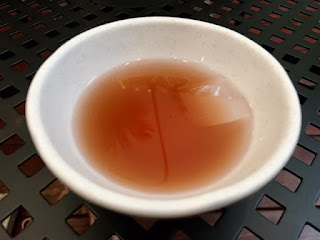